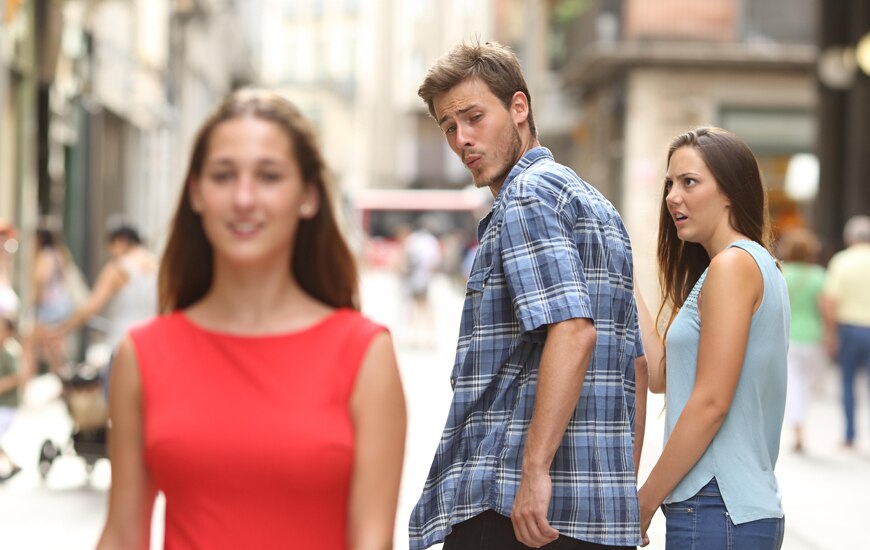 There you are, sitting down at a nice restaurant enjoying date night when the hostess takes a couple women to their table right near yours. You look up to say something to your partner, but you catch him ogling the women as they walk past. This leaves you feeling angry, hurt, and maybe even unwanted—after all, why would he be checking out other women, especially right in front of you?

The very first step of trying to help your man get over this problem is getting him to see that it is a problem, which a lot of guys don’t think it is; partially due to the fact that they are either single or the woman in their lives aren’t affected or they don’t even have a woman in their life. For the guys that do recognize that it’s not a good situation to be in, it’s a big step because they are admitting that they don’t want to continue this behavior.

It’s in the Brain

The key behind this habit is understanding that by checking out other women, it makes them feel good. Men are prone to get a positive physical reaction when they see a woman that they find attractive. Their brain answers this with a neurochemical that sets them on cloud nine, which makes them want to keep doing it to get that feeling again.

This chemical response is why they have this habit and it doesn’t help that they are constantly bombarded with scantily clad, attractive women on television shows, movies, and so forth. It makes it that much harder to break this particular habit. Some would even consider it a natural reflex rather than a habit because some men don’t even realize they are doing it.

How to Get Him to Stop

1. Make him understand that it’s not a reflex but a habit, meaning that he does have a choice to look or not. It may be a deeply rooted habit, but it can easily be a broken habit.

3. You have to recognize that it is a natural and normal thing to notice a lovely lady. What you are trying to do is to help him reel in how frequently he checks out these women. It’s not going to stop completely, but to have him do it less often is the goal.