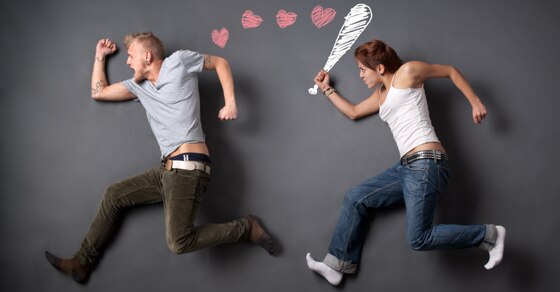 Ahhh, the thrill of the chase. Everyone has been there at one point or another. This guy is invigorating, intoxicating, and no matter how much you may fantasize about being with him, it seems like he is always just outside of your reach. He becomes that one thing that you obsess about, you forget how to keep calm and be that cool woman that you really are. In essence, you’re changing yourself just to meet men.

Why do ladies who have so much to offer, torment themselves by a guy who doesn’t want to give back as much attention and desire as they get? According to a relationship guru, these phenomenon suggests that the women, these “chasers,” are under some kind of impression that their happiness lies in the future and that there is a payoff for getting that person they are chasing. These women set a goal (typically a man they desire) and they pursuit it with reckless abandon.

So you may be wondering how men feel when they are being pursued. For women, we assume that the guy enjoys it, that it is secretly what they want. However, the relationship guru believes otherwise.

If you think about it, women who fixate on a particular guy, they begin focusing on the possibility of a future simply because they are utterly convinced that there is this magical world exists when they finally snag that guy.

Unfortunately, these women are the ones that often say things like, “I just want his love! This isn’t fair and I can’t believe guys are treating me like this.” When you look at it from the guys perspective, this woman transforms into a great girl that is fun and easy to be around; however, when she doesn’t get what she wants (the guy), she gets all defensive and turns herself into victim. When people start chasing, they do themselves a huge disservice and make you blind to whatever happiness she does have in her life.

If you recognize that you’ve become the chaser, you don’t want to assume that you can flip the switch and get him to start chasing you. Contrary to popular belief that men do not like chasing, either. Sure, some may say that they prefer to be the one who approaches and tries to woo another person, which is true for the most part. However, when women play a little too hard to get, it just feels like a chore to the guy and depending on how much they are willing to deal with, they may not stick around for long!

When both people stop chasing and decide that there is a mutual attraction, then you’re saving yourselves a lot of headaches. You’ll find that when you finally meet the right person, you won’t even have to chase them. You will both want to meet each other half way and your paths will align.