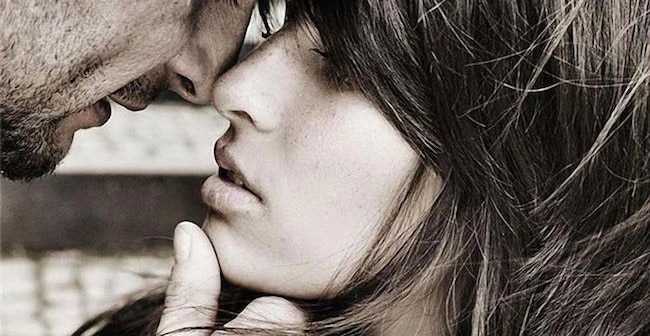 Men can be predictable, but here are 10 ways to make him want you more than he ever has before.

As the oldest trick in the book, if you hold your stare even just for a few heartbeats longer, you’ll be sending him a subliminal message that lets him know you are totally digging him.

The way you smell is a powerful tool in how people perceive us. When someone walks past you wearing an intoxicating scent, you are captivated by them. Scent can stimulate areas of your brain that has a direct connection to sexual desire, so if you want to get lucky, spritz on a bit of perfume!

Men love having their egos stroked and one way you can do that is by laughing at his jokes—no matter how corny they are. Keep in mind, if you truly like this person, then you won’t have to force the laughter because you’re into him and you get his sense of humor.

If you just met someone and you find them attractive, make sure you call him by his name. This creates intimacy and he’ll have a warm feeling toward you. You don’t want to overdo it though because then you’ll sound like a parrot or a broken record.

It’s cool to be around people who are like open books, but if there is too much information thrown at us, we lose interest really quickly. If you give your crush too much information, they won’t find a need to try and get to know you better because he’ll feel like there is nothing more to know.

Although you want to leave a bit of mystery for him to discover, you also want to make sure that you are being true to yourself. This means show the real side of you—no matter how awkward or vulnerable that may be.

Men love when they can help a lady out, even if it means letting her borrow his pen. When you let him do small things for you, it gives him a sense of purpose and lets him feel like he has something that he can offer you. By letting him to things for you, he will get that ego boost and will want to continue that feeling and think that they’re attracted to you.

8. Be friendly to everyone.

Although you don’t have to be everyone’s best friend, you should at least make an effort to be courteous to everyone you meet. If he sees that people like you, he’ll probably start to like you as well; and, if it doesn’t work out, at least you’ll have a new set of friends!

Wherever he goes, be there too. Now that doesn’t mean go into stalker mode, but it does mean that you could learn his schedule and just so happen to appear somewhere that he is at the same time. Remember, you don’t want to be creepy about it.

10. Introduce him to something new.

Whether it is a new activity, hobby, television show, music group, or maybe even a new flavor of gum… When you introduce him to something he’s never had before and he will always associate that new thing that has now become his favorite, with you. In his mind, it will let him know that you’re awesome and you should be his new favorite thing, too.