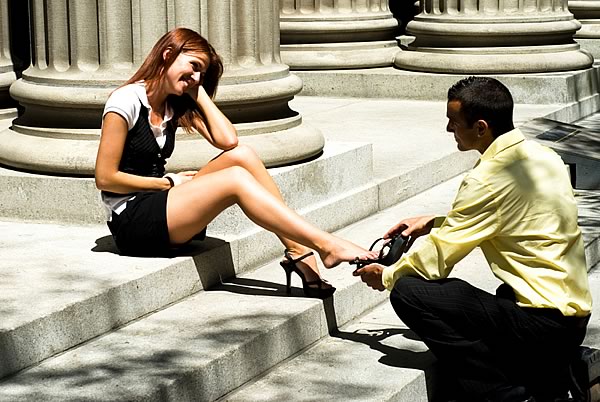 You’ve met a guy and you’re really into him, but you don’t know how to show him without feeling like you’re going overboard and freak him out. You may be wondering how much you should reveal about yourself and when.

Firstly, you have to determine if you are born the with the ability to flirt effortlessly or if you are someone who could use a little bit of help (psst, if you’re reading this article, chances are you are the latter rather than the former).

Don’t worry though, you needn’t worry about how you’re going to let him know that you like him because we came up with a few tips that will help you flirt with him and grab his attention.

Complain about something together.

Find something that is small and insignificant that ruffles your feathers. It could be the way the lighting makes the room feel like a morgue rather than a bar. When you poke fun at something together, it helps you feel closer and on the same page. Keep in mind, you don’t want to appear like a downer, so use this tactic only once.

Compliment something about him.

Whether it is a new shirt, the joke he told, he just that you enjoy his company. When you let him know that you appreciate something about him and pay him a compliment, he appreciates your effort. If he says he needs another opinion about something, offer to be the source of that other opinion.

Don’t try to one up his story.

He may be sharing his trip through the Redwoods, you don’t want to interrupt and tell him you went hiking through Yellowstone. You should really make the effort to sit there and listen to what he is saying. Through the story, feel free to ask questions that require him to give an in depth answer. The questions will encourage him to continue and when you smile off and on through the story, he will be encouraged to tell you more things about himself.

While you’re having a conversation with this guy, you should make it a point to make consistent and genuine eye contact. In doing this, you’re letting him know that you’re riveted by what he’s saying. Keep your body language neutral, rather than stand-offish.

Don’t wait too long to respond to a text.

Forget the “make him wait” mantra women used to follow because a good guy won’t play games and the “rules” is the quickest way to turn him off. You may think that you’re playing hard to get, but he wants to know where he stands with you and by ignoring him, he’ll assume that: