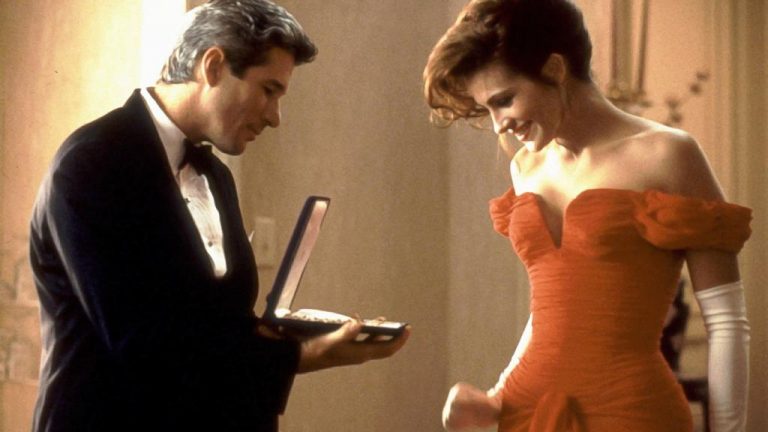 We’ve all seen those romantic comedies that paint this idea of what love is like and what we can do to fall in love with someone. These movies tend to be the go-to example of what single women (and those single guys who just don’t give a crap what people say) want to happen in her own love life.

These movies make the prospect of falling in love seem so easy, it’s almost laughably so—especially because these movies are full of clichés that are just so… Roll-your-eyes worthy.

Here’re 8 top rom-com clichés that are just not going to happen in real life.

If you’re looking for the biggest cliché, it’s the call girl whose client falls madly in love with her and changes her way of life (read: people from two completely different lifestyles fall in love). While it’s a sweet thought, it rarely works out. While opposites do attract, it rarely makes for a long standing relationship.

Hugh Grant is a perfect example of this cliché. He seems incredibly charming while he is humming and hawing around a topic and then comes to the conclusion out of the blue like an epiphany. If you’re thinking about trying this tactic on someone you’re interested in, you don’t want to do it unless you’re going for that “I think there’s something wrong with them” response. And even then you probably won’t get a kiss.

This is also a very common cliché. Two people begin the movie with a severe dislike (almost borderline hatred) for one another. Then as the movie progresses, they slowly start to fall in love with one another. Of course, since it is a movie, they won’t tell the other until they are in the middle of a huge blowout and BAM! They kiss and then it’s like a light off and they suddenly realize that they are head over heels in love.

We’ve seen the movie where there are a set of friends, one is in love with the other while that one is oblivious. Time and time again, the best friend is there for the other—even on their wedding day! Something happens like the best friend catches the fiancé cheating and they tell the best friend. Yadda yadda yadda. You know how it goes. This cliché is so overrated.

While we want to believe that looks don’t matter in a relationship, rom-com’s like to play up this idea to the nines, often pairing an insanely beautiful person with someone who is not blessed in the looks department. It’s a nice thought, but it usually doesn’t work out that way because the beautiful tend to stick together.

6. The Quirky and the Jerky

Whether it is the gaming nerd, the jaded entrepreneur, or the relentless player, this cliché gives us the impression that everyone is desirable, regardless of the one fatal flaw. Who really wants to date someone who is a self-professed womanizer or a gamer who lives in his parent’s basement?

This is one cliché that is so obviously wrong, it’s amazing that Hollywood still does it. You know, it’s when there is this incredibly gorgeous person is supposed to be ugly simply because her hair is in a ponytail and she is wearing glasses and the movie tries to make it seem like she is totally undateable; however, when she takes off her glasses and lets that hair down, WOW she’s a stunner. Yawn.

This cliché is when someone pretends to be someone they aren’t and when the love interest does fall in love, they are shocked to learn that this person they’ve fallen for isn’t who they said they were. Anger, yelling, and feelings of betrayal are going to be felt, but within a few days, they are back in each other’s arms for one reason or another. We want to believe that falling in love is so easy and can happen to anyone, but these rom-com movies give many people false hope, and we wish they would go away.