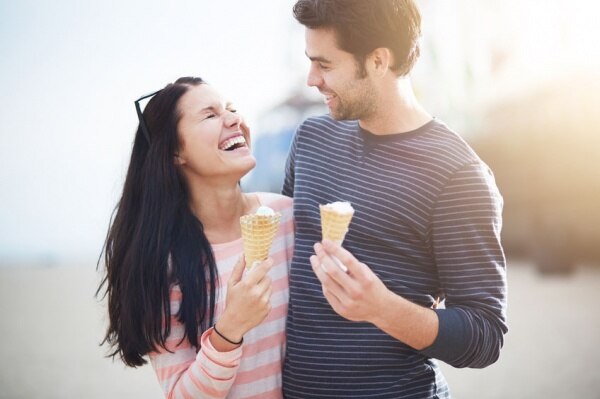 Men can be difficult to decode and their flirting techniques can be too subtle. Here are 8 signs that let you know he really is flirting with you.

Everyone smiles a bit differently from the next. Some smile with their mouth shut and some show their teeth. Some guys are just shy. However, if you see that he has a gleam in his eyes when he smiles at you, chances are he is pretty interested in you.

2. He gives you special treatment

When you’re talking to a guy, he will lean forward and only pay attention to you. This may be something he does for only you and no other women. If he focuses more on you than other women, it is a clear indicator that he is interested in you. Keep in mind that he may be naturally flirtatious and this could be part of his mannerism. You can figure it out by watching how he interacts with other women. If he treats you the same way as he treats them, then he may not be flirting.

Men will typically try to touch you and form a connection with you if he is interested. He might light his hand touch yours when handing you something, his foot may rest against yours if sitting across from one another, he may even walk so close to you that your arms graze one another from time to time. Subtle touches like this can be a huge turn-on for both of you!

4. He leans toward you

Body language can be a bit confusing to decipher. However, this is really easy. If he leans in and turns a shoulder toward you while he’s listening to you, he’s focusing on you and flirting too.

5. He remembers what you say

Whether you are telling a joke, a story, or some detail about your life—if he can recall it at a later date, then not only is he listening, but he committed it to memory.

6. He asks if you’re single

Men who are interested in dating you will come right out and ask if you’re single (the shy guys may hint at it, though). They ask this because they are envisioning themselves dating you. If he admonishes something along the lines that he cannot believe that an awesome woman like you is single, then you can definitely be sure that is he flirting.

Shy guys may not be the most forthright when they like a woman, but their body cannot hide their attraction to you. If you’ve ever noticed a man blushing around you, then you can assume that he is trying to flirt with you. Oh, blushing isn’t reserved just for the shy men either—any man has the capabilities to blush—even the most macho of men.

If you notice that he is playing with a napkin, adjusting his collar or sleeves, shifting in his seat, or even playing with his hair—he is nervous. He’s nervous probably because he is trying to flirt with you but isn’t sure how to do it without turning you off. In a way, this is incredibly endearing and sweet… Don’t you think?